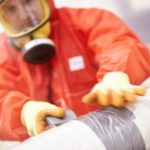 There are lots of reasons why you would need asbestos disposal in Burnley. In the past, asbestos was considered a viable construction material. It has good insulation properties, so starting around the 1900, it was heavily used in construction. Those were the days when electricity was beginning to spread on a wide scale, so it was commonly used to insulate wires in electrical systems. Asbestos is also flame resistant, so it was incorporated in cookers and hotplates as a protective measure. In older buildings, asbestos was mixed with cement and other construction materials so that the house could resist accidental fire damage, as well as keeping the house warm during long, cold winters.

Whenever there’s a demolition or home restoration in Burnley, asbestos disposal is part of the process. You’ll find that many homes which were refurbished from 1950 to 1980 had a lot of asbestos in them. Back then, it was considered one of the best construction materials around. People were glad to incorporate it in their buildings. Unfortunately, as time and technology has progressed, we’ve realised that asbestos has lethal side effects. It can cause mesothelioma, lung cancer, and asbestosis. And the older buildings get, the more asbestos leaks into the environment. As it slips into living spaces, it starts to cause breathing problems and other complications.

When an old building needs to come down, it creates a need for asbestos disposal in Burnley. At times like that, it helps to contact Asbestos Associated. We are trained in all forms of asbestos survey, removal, and disposal, and we follow precise environmental standards. The parts of the house that have the highest levels of asbestos are steel frames, piping, and boiler plates, so if your house has any of those, you should give us a call. We’ll take care of it for you before it starts to cause you and your residents any health problems. Asbestos tends to disintegrate, turning into tiny microscopic particles. Inhaling these asbestos fibres is harmful and should be treated as soon as possible. So if your building residents suddenly start to experience laboured breathing, first, call a doctor. Then, call us. We’ll perform a survey and if we find dangerous levels of asbestos, we’ll gladly get rid of it.

Very pleased with the garage demolition. The two men who carried out the work were very fast and left everywhere tidy. We would recommend your services.

Many thanks!! Very pleased!!

Many thanks for your work on Thursday!